What is the development trend of metal spinning

At present, the general trend of foreign metal spinning is to develop in the direction of scale, serialization, high precision, multi-function and automation. 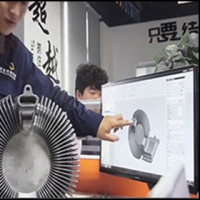